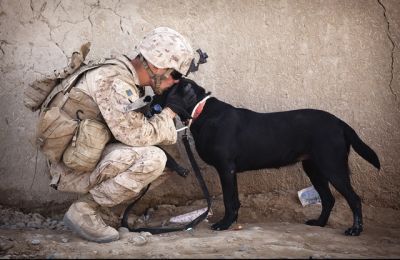 Veterans With A Loud Bark

Today is K-9 Veterans Day and as a way to celebrate these heroes here are some of the most famous war dogs in history.

Sergeant Stubby: He is known as America’s first war dog and probably one of the most decorated. Stubby meandered onto the Yale University campus where men of the 102nd Regiment, 26th Infantry Division were in training for their deployment to fight in World War I.  The soldiers became very fond of the bull terrier mix leaving food scraps and other things out for the dog. Corporal Robert Conroy hid Stubby on the ship as they sailed to France. Once in France, Stubby awoke in the middle of the night and caught a German spy that was tracking the positions of the soldiers. He served for 18 months and participated in 17 battles. After the war, Stubby headed to Georgetown with Robert where he became the mascot for the football team and the University's mascot.

Nemo: Was a German shepherd that served in Vietnam. His legendary night started when Nemo and his handler Airman 2nd Class Robert Thorneburg were out on patrol. They were a quarter mile from the air base when Nemo alerted Thorneburg of enemies being present. Thorneburg didn’t have time to radio for help so he released Nemo and started to fire. Nemo and Thorneburg had been shot, however that did not stop Nemo. As the Viet Cong soldiers were closing in Nemo took off after them, giving Thorneburg time to radio for help. A team of soldiers arrived and Nemo crawled on top of Thorneburg to protect him from harm.  Nemo received medical treatment but was left blind in one eye. He retired with honors from the U.S. military.

Cairo: The dog that was a part of Seal Team Six who found Osama Bin Laden. He is a Belgian Malinois, who had Special Force training which entails bomb sniffing and parachuting from helicopters, along with many other things. Cairo is able to do things that humans and robots aren’t able to do.  The dogs are twice as fast as humans so no enemy is able to out run them. They’re also equipped with video cameras on their vests that allow soldiers to see what the area is like before they enter they can also see hidden dangers. Cairo was right along Seal Team Six as the invaded Bin Laden’s lair.

Our furry friends have shown us how amazing and brave our veterans are. You are able to help a veteran today by donating your unused vehicle such as an ATV, truck, RV, or even boat to Vehicles For Veterans. All you have to do is fill out our online donation form or call us at 1-855-811-4838. We provide free towing from a location that is best for you anywhere in the United States. We are a 501(c)(3) organization so you will receive the best possible tax deduction for your donation. Don’t wait any longer help a veteran in need today!