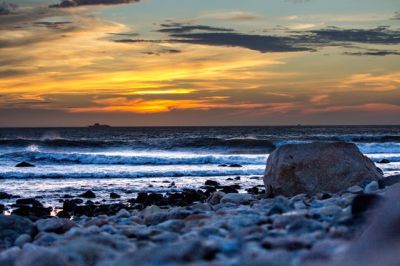 On Feb. 3, 1943, the U.S.A.T Dorchester, an Army transport ship, was carrying 902 people from Newfoundland to Greenland on its way across the Atlantic. Among the passengers were service men, merchant mariners and civilian workers. In the early morning hours, the Dorchester was struck by a torpedo fired by a German U-boat. The strike took out the radio communications, knocked out the power, and caused the ship to quickly take on water.

Luckily, three Coast Guard ships assigned to escort the Dorchester saw the blast and were able to save 229 survivors. But they weren't the only ones who saved people. Also aboard the ship were four Army Chaplains, Lt. George L. Fox, a Methodist reverend, Lt. Alexander D. Goode, a Rabbi, Lt. John P. Washington, a catholic priest, and Lt. Clark V. Poling, a Dutch Reformed reverend. A chaplain is an ordained member of a religious sect who receives a special assignment, such as the armed forces, a university or hospital.

With the power out and the ship sinking quickly, the men still aboard the ship began to panic. The lifeboats that were on board were lowered, but many of them weren't secured and floated away. Others were filled over-capacity and capsized. Amid the panic, with everyone trying to grab life vests before going into the icy water, the Four Chaplains remained on the ship and offered prayers and words of comfort that helped the other passengers feel hope. Rabbi Goode also gave his only pair of gloves to a sailor who had forgotten his in his cabin.

As the last of the life jackets were taken, the Four Chaplains wordlessly handed out their own life jackets so that four other men could be saved. Until the end, the Chaplains continued offering words of comfort for those who would survive as well as final blessings for the men who wouldn't make it.

Giving up your own life jacket so that others could have a chance to live is one of the most heroic and altruistic acts imaginable. For their bravery and selflessness, each of the Four Chaplains was posthumously awarded the Distinguished Service Cross and a Purple Heart. Congress also allowed a one-time only Special Medal of Heroism to be granted to the men, due to the fact that strict requirements made it impossible to award the men with the Medal of Honor.

Today there are nearly a dozen statues, sculptures, murals and stained glass windows to memorialize the Four Chaplains throughout the U.S. Sadly most of the men aboard the Dorchester didn't survive, but the heroism of the Four Chaplains will never be forgotten.

On a day that's all about giving back to others, you can get involved by making a vehicle donation to Vehicles For Veterans. We are a 501(c)(3) nonprofit organization that benefits veterans' charities. The proceeds from your car donation will help build better lives for disabled veterans and veterans with other needs all throughout the country.