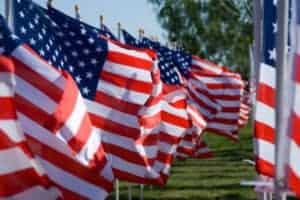 It has been 72 years since Japan officially surrendered in 1945, and World War II finally ended. Victory over Japan Day (VJ Day) is celebrated on Sept. 2—the day that Japan surrendered and WWII effectively ceased. The first VJ Day sparked a national celebration and an iconic kiss featured in Life Magazine. What do you need to know about VJ Day? Read these interesting facts to find out:

The United States fought in WWII for three years, eight months and seven days. The U.S. officially entered the war when Japanese pilots bombed the Pearl Harbor military base in Hawaii on Dec. 7, 1941. Japan’s surrender was announced on August 14, 1945, and the formal surrender was on Sept. 2.

This famous picture was published a week after VJ Day in Life Magazine. The sailor depicted in the photograph was later discovered to be veteran George Mendonsa. Mendonsa was on a date with his current wife, Rita Petry, before they were married, but she was not the other subject of the famous photograph. Mendonsa and Petry had been at a bar, and when they were leaving he saw the nurse.

Out of instinct, Mendonsa grabbed the nurse, dipped her and gave her the kiss that would later grace the face of Life Magazine. Petry says that she was in the background grinning and that it didn’t matter to her. Greta Friedman, the widely-suspected nurse in the photograph, reflected that the kiss wasn’t romantic—it was a celebration of the end of the war.

3. VJ Day Is Not A Legal National Holiday

4. Veterans Gave Everything For Their Country. You Can Give Back!

More than 400,000 Americans lost their lives during WWII. Several more were injured. Lasting injuries and other traumas have been affecting veterans in every bravely-fought war since WWII as well. A hassle-free way to give back to veterans is to donate any unwanted vehicle to Vehicles For Veterans.

Vehicles For Veterans, a 501(c)(3) nonprofit organization, is a donation service dedicated to benefiting veterans’ charities. Supporting veterans with PTSD and other mental illnesses, homeless veterans and disabled veterans are just a few charities that Vehicles For Veterans benefits. When you donate, you receive a great tax deduction and free towing! Donate today by calling 1-855-811-4838 or by filling out a car donation form.