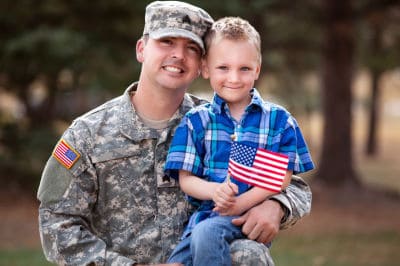 June 19 is Father’s Day—a holiday celebrating fathers, the strong bonds with their children, and the positive impact fathers have on the world. Whether you visit your father and play a round of golf, or send him a card in the mail, it is important to acknowledge the influence and responsibility that fathers have. To be inspired by how heroic fathers and their children can be, read the stories of a couple famous American military father-son duos.

While most Americans know Theodore Roosevelt as the 26th president, and one of the most famous, he first rose to prominence as a member of the military. Roosevelt recruited his friends and acquaintances for the First Volunteer Calvary Regiment, more famously known as the Rough Riders. During the Spanish-American War, Roosevelt led the Rough Riders to victory at Kettle Hill, claiming it from the Spanish.

Roosevelt’s son, Theodore Jr., is much less prominent, but perhaps accomplished even more than his father. Brig. Gen. Roosevelt Jr. helped form the American Legion in 1919 after his service in World War I. After holding several positions in government, he returned to the military in World War II. Brig. Gen. Roosevelt Jr. led the first wave of troops on D-Day at Normandy and earned the Medal of Honor, the highest military honor, for his leadership. Unfortunately, he died 36 days later in France.

His father, George H.W. Bush, decided to leave Yale in response to the attacks on Pearl Harbor. Two years later in 1944, Lt. j.g. Bush piloted an attack on Chi Chi Jima at the age of 20. Bush’s plane caught fire, but he continued the attack and still managed to score critical hits on his targets. Bush flew the plane far enough from the island with the engine still ablaze for himself and his crew to bail out—it took four hours for him to be rescued. For his heroic efforts, Bush was awarded the Distinguished Flying Cross.

Celebrate This Father’s Day By Donating A Car

The military and the nation’s veterans are filled with fathers, mothers, daughters and sons. Many veterans suffer from disabilities that came from their brave service defending the U.S. To give back to veterans, you can donate your car to Vehicles For Veterans—a nonprofit 501(c)(3) organization that benefits disabled veterans. Donating your unwanted vehicle is a great way to celebrate Father’s Day as it benefits fathers who served in the military and your father who wants to get rid of his vehicle without the hassle. When you donate, you receive a great tax deduction and free towing. Donate your car for Father’s Day by calling 1-855-811-4838 or filling out an online car donation form.