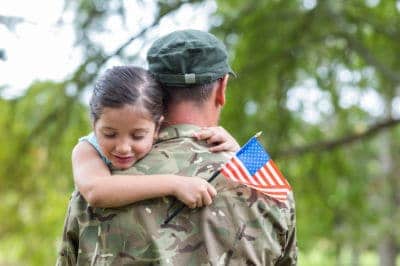 Facts About The Road Back To Civilian Life

Serving in the military comes with a unique set of challenges, but for many veterans the challenges continue after their military service is over. The difficulty of transitioning back to civilian life depends on a number of factors. Understanding these may help more veterans seek out the help they need in their transition.

A Pew Research Center study found that four different factors may make the transition to civilian life easier for veterans. These include: being a commissioned officer, having a college degree, having a clear understanding of the missions taken in their service and regularly attending religious services.

Other factors had the opposite effect on veterans' ease of transitioning. These include: the era of their service, serving in combat, experiencing traumatic events, a serious injury, knowing someone who was injured or killed, and marital status.

One of the main things that affects a veteran's transition is the era that they served. According to the Pew study, a survey of veterans from all eras shows that approximately 30 percent of veterans had a difficult time with re-entry, and the remaining 70 percent reported an easy time adjusting. However, looking only at veterans from post-9/11 wars, 44 percent reported a difficult time.

A number of situations such as being in combat, experiencing a traumatic event and being injured all leave a significant impact on a veteran. Emotional or physical trauma increased the chance of a difficult re-entry into civilian life more than any of the other factors. In post-9/11 wars, approximately 43 percent of veterans reported having a traumatic experience and 16 percent suffered a serious injury. The study showed that the chance of easy re-entry was reduced by 26 percent for those who experienced trauma.

Surprisingly, being married during military service actually increases the likelihood of a difficult transition. Other studies show marriage has a number of positive effects on health and personal satisfaction in the civilian population, but that may not be the case for veteran families. The Pew survey found that deployment is more likely to have a negative impact on marriages, making the transition more difficult for married veterans. Among veterans whose marriages suffered as a result of deployment, 61 percent reported a having a difficult time re-entering civilian life as well.

Many veterans do experience a difficult time adjusting back to civilian life when the time comes. The road can seem filled with obstacles, but there are many services and programs available to make the re-entry period more manageable.

Military OneSource recommends starting on your pre-separation counseling, which is required by law, as early as possible so you can get a head start on your next steps. It's also helpful to stay motivated throughout all of the steps of separating so you can complete them in a timely manner. Networking with others is a great way to find out about job leads and meet people in the industry you want to enter after you leave the military. Above all, showing confidence will help you be successful in the next chapter of your life.

Every veteran faces his or her own challenges when leaving the military to re-enter civilian life. You can help fund resources that make the transition easier by donating your car to Vehicles For Veterans. Our car donation program benefits veterans' charities. Participating is also an easy way to get a great tax deduction and free vehicle towing. Get started on your vehicle donation today by calling 1-855-811-4838 or filling out an online car donation form.