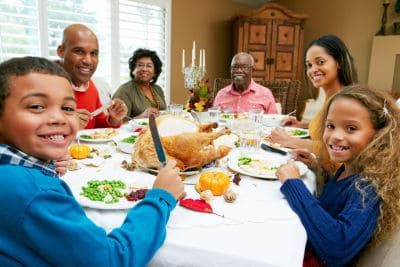 When we think of Thanksgiving, most of us know about the Mayflower and sitting down for a big feast. However, throughout the years the traditions have changed.

When we think of Thanksgiving, turkey and mashed potatoes come to mind, but in the only written account of the first Thanksgiving we have, turkey isn’t even mentioned. Those delicious mashed potatoes and cranberry sauce weren’t even invented yet. The dinner was most likely duck, venison, or seafood for the meat, and cabbage, onions, corn and squash for the sides. The only thing that might be the same now is eating pumpkins, however not pumpkin pie. The first Thanksgiving wasn’t one big feast but actually went on for a full week. Some days everyone would eat together and on other days they would eat separately.

It wasn’t until the 19th century that what we think of as the typical Thanksgiving meal was started. As people started to grasp the holiday, local cooks modified the menu to both things people liked to eat and things that were a necessity. As local cooks all over the states modified the menu, different regions developed different food traditions:

After The Meal Traditions

The after meal traditions are changing as people are finding new things to do.

During the first Thanksgiving, the Wampanoag people might have taught the Pilgrims the pin game, which is a game where they try to get rings onto a pin. The children might have played a game called Blind Man’s Bluff, which is a tag game where one person is blindfolded and has to find the other players.

The typical modern day after-dinner tradition could be family and friends sitting around watching football on T.V. or they could even be outside playing football with one another. One tradition that has been starting to develop in recent years is shopping. The Friday after Thanksgiving has been known as Black Friday in modern years. It is a day that stores open early and have sales so people can get a jump start on holiday shopping. However, in recent years some stores are trying to beat the others and are opening on Thanksgiving night; because of this some families are making it a tradition to go shopping once they are done with their meals.

Give Back This Holiday Season

With so many of us focused on making the perfect meal or winning a game don’t forget that true meaning of Thanksgiving, which is giving thanks. Our veterans have given so much to protect our country so why not show them how much they matter by giving back. If you have an unused vehicle that is sitting around taking up needed space you can donate it today to Vehicles For Veterans and the proceeds will go to helping veterans in your area. You can fill out our online donation form or call us at 1-855-811-4838. In return for your generous donation you will receive a tax deduction for your car.

Donate today and show those who protected our country how much you care!