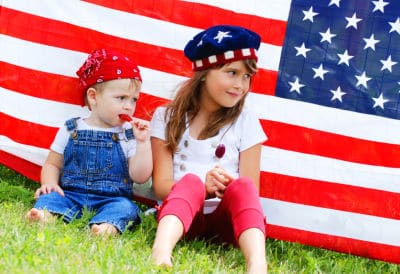 Brush Up On Your Flag-Flying Etiquette Today

Throughout the year, there are plenty of occasions to fly the flag. Whether you fly the American flag every day or just take it out on patriotic holidays, Flag Day is the perfect time to refresh your memory and learn a few interesting things about the flag.

How To Fly The Flag

Raising the American flag is a great way to show your patriotism, but you want to make sure you're flying it in the most respectful way. It may seem simple enough, but there are actually quite a few things to keep in mind, such as these tips from the U.S. Flag Code:

How Flag Day Is Celebrated

The idea for Flag Day was started by a Wisconsin school teacher, B.J. Cigrand, back in in 1885. June 14 was chosen because it marks the anniversary of the first American flag being adopted by Congress in 1777. Flag Day was created to celebrate the anniversary of our flag, but also to teach kids about its history. Throughout its history, the flag has gone through 27 official design changes as more states were added to the Union. In the 1800s, the flag changed as many as 17 times in 50 years. The current 50-star flag is the only version that has remained the same for more than 50 years.

Today there aren't many official celebrations or traditions surrounding Flag Day. Many people simply fly the flag at their home or attending a local parade or flag-raising ceremony. Flag Day is also the traditional day that American Legion Posts and some Boy Scout troops will retire unserviceable flags in an official ceremony.

Give Back To Veterans On Flag Day

Veterans have made many sacrifices fighting to protect what our flag stands for. Freedom comes at a cost, and we have veterans and active duty military members to thank for their work in protecting it. If you don't have any Flag Day traditions of your own, start a new one today by donating your car to Vehicles For Veterans. Our car donation program supports disabled veterans and gives them a better life. Plus your donation is tax deductible and you receive free towing. Donate your car today by calling 1-855-811-4838 or filling out an online car donation form. Your donation makes a difference!