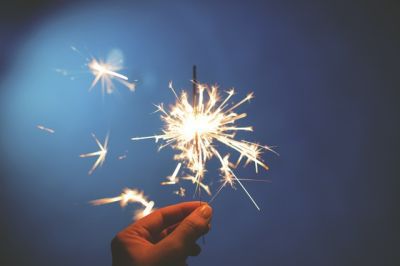 Most people get their celebrations in on New Year's Eve, while New Year's Day is usually spent as a relaxing day with family. You probably have quite a few traditions for New Year's Eve such as watching the ball drop in Times Square, but there are plenty of fun traditions for the first day of the year too.

Many people have a tradition of eating circular shaped foods on New Year's Day. The reason behind this is that the circle shape symbolizes the cycle of time that starts anew on New Year's Day. Luckily there are plenty of delicious circular foods to choose from like cookies, oranges, pancakes, donuts and pizza.

If you go along with old superstitions, other foods considered lucky for New Year's Day are black-eyed peas, leafy greens and pork. Black-eyed peas are thought to resemble coins and greens look like money, so eating them today is said to bring you more prosperity and general good luck in the New Year. Pigs are symbolic for moving forward and being prosperous too. Because pigs are fat and well-fed and they "root forward" while looking for food, this means you too will be well-fed and will move ahead in your life in the New Year if you eat pork today.

With New Year's Day falling on a Sunday, several traditional events of the day will actually move to Monday. Unfortunately there won't be any college football today because this conflicts with the NFL's last Sunday game of the regular season.

Thanks to rain in the forecast and an old "never on Sunday" rule coming in to play, the Rose Parade won't be held on Sunday either. However, you can watch the Mummers parade in Philadelphia, the always-fun New Year's Day Parade in Egg Harbor, Wisc., or if you can catch them on TV, the New Year's Day parades taking place in London and Rome this Sunday.

Start Off By Giving Back

Many see New Year's Day as the day that sets the precedent for the rest of the year. If one of your resolutions is to volunteer more or give to charity, starting on the first day of the year is the perfect way to start 2017 on the right foot.

If getting a new car is also on your list for 2017, you can do two things at once by donating your old car to a worthy cause. Vehicles For Veterans will come pick up your old car for free no matter where you live. Better yet, donating will give you a tax deduction that you can use for your taxes next spring.