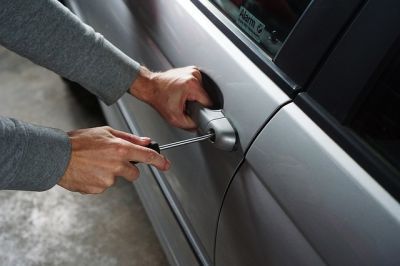 Although new cars are getting more and more difficult to break in to and steal, car theft still happens. In fact, a car is stolen every 43 seconds in the U.S. Over the course of a year, that adds up to almost a million vehicles. Following these safety tips may help protect your car from becoming a statistic.

On a hot day, most of us don't think twice about leaving the window down a crack. While this opening seems too small for anyone to get in, a thief can still grab the top of the window and rock it until it's off its track, which allows them to pry the window down.

You might think luxury and high-end vehicles would be the most common targets for car thieves, but it's usually the opposite. Civics and Accords are actually the most commonly stolen cars. Why? They're easier to steal and the parts are in higher demand because these cars are so common. If you drive a common car, even an older model, it helps to be aware of this fact.

It's impossible to avoid sometimes, but where you park really does matter. Parking in underground structures, carports, alleys and secluded streets puts your car at risk. If you have the option, parking in front of houses or in driveways will help keep you safer.

Car thieves tend to steer clear of highly-visible areas, especially if there are security cameras or nosy neighbors around. This is especially important at night between 2 and 5 a.m. Since most people are asleep, that's the most common time for cars to be stolen.

If you warm your car up in the morning, this makes it incredibly easy for the opportunistic thief to just jump in and take off. In addition to this, don't leave the keys in the ignition if you have to go inside to pay for fuel at the gas station. No matter how safe the area is, this is an open invitation for thieves.

No, the glovebox, center console or visor is not a safe place to keep your spare. If there's a spare key in the car, a thief will know where to find it. Instead, keep your spare on a separate key ring in your house or in a purse or messenger bag that you carry with you.

Some Cars Have A Valet Key

Certain car models come with a key that can open the door and start the car. This is usually intended for a parking attendant to use when parking your car. However, most people with a valet key don't know they have one because it's usually hidden. If your car has one, it may be tucked in the owner's manual or in a tool kit that came with the car.

Never Leave Valuables In The Car

It almost goes without saying that you shouldn't leave expensive things out in plain view in your car. Laptops, purses or even CD cases can make your car more appealing to break into. However, you also need to make sure that important paperwork isn't stored in your car. If you keep your car's title and registration in the glove box, it's time to rethink that. With these documents, a car thief has a good chance of getting away with it even if a cop pulls them over.

How To Get Rid Of Your Car

Want to get rid of your car by your own accord? When you do want to upgrade or get a new vehicle, donation is a great option for your used car. Vehicles For Veterans gives you a great way to get just about any vehicle off your hands regardless of whether it runs or not. You'll receive free towing and a great tax deduction. Best of all, the proceeds from your donation help fund programs for veterans and their families.