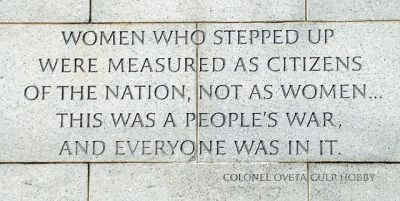 Memorials To Women In The Military

The Women's Memorial honors all US servicewomen past and present, including women who have served in each branch of the military and as nurses and other occupations that directly helped the military.

Another memorial just for women in the military is currently under construction in Las Cruces, N.M. Plan a trip to the Veterans Memorial Park on Roadrunner Parkway for this spring, when the memorial is expected to be unveiled.

Plans and preparations for the Women Veterans Monument have been underway for years. The memorial is expected to feature a design with 6 female figures, each displaying a different role that women have served in the military.

If you're passing through the French Quarter of New Orleans, don't miss the Molly Marine statue. The statue honors women who took up men's roles during WWII, which allowed more men to serve in the Marines and other branches.

An interesting fact about the statue is that it's made of cement, which is not a common material for statues. However, it makes perfect sense when you consider that the statue was commissioned during wartime when most metals were rationed. In 1999, two bronze replicas of the statue were made. These copies stand at the Parris Island Marine Corps base in South Carolina and at Quantico, Va.

First Lt. Sharon Lane was stationed at the 312th Evacuation Hospital at Chu Lai in Vietnam. Her assignment was to the Vietnamese Ward 4, where she worked 12 hour days to care for wounded civilians. After only a few months serving overseas, the hospital she worked in was struck by Viet Cong rockets and First Lt. Lane was killed instantly. She was one of only eight nurses who died during the Vietnam War.

In honor of First Lt. Lane's service, the Fitzsimmons Hospital in Aurora, Co. named its recovery room after Lane and placed a plaque in her honor. The Aultman Hospital of Canton, Ohio dedicated a statue of Lane and opened the Sharon Lane Woman's Center in its lobby. The Canton chapter of the Vietnam Veterans of America also changed its name to the Sharon Lane Chapter #199.

Sybil Ludington sprang into action after an exhausted messenger arrived at her home with news of a British attack during the Revolutionary War. The messenger was carrying news that the British had descended on Danbury, Ct. where munitions and supplies for the whole region were kept. When the messenger couldn't go on, Sybil, who was just 16 years old, got on her horse and quickly spread the word to everyone in the surrounding countryside. This allowed the patriots to head out and force back the invasion in time.

Most people have probably never heard of Sybil's deeds, but they are memorialized in a bronze statue of Sybil riding to spread the news. Find the statue in Carmel, N.Y.

Give Back To Veterans This March

Many women throughout history have heroically fought and served alongside men in every American conflict. Visiting one of these memorials is a great way to honor the accomplishments of women during Women's History Month. You can also read more about how women have made a difference and changed military history in our blog.

One of the best ways to make a difference this month is to donate your car to Vehicles For Veterans. The proceeds from your car donation help fund important programs that help veterans have a better life. It's easy to make a difference by donating your car. Just give us a call at 1-855-811-4838 or fill out an online car donation form to get started!